May 13, 2012
It is 1 week since I ran the Mississauga Half Marathon in 1:55:29. It was hands down my best race ever and I have been digesting it all week. I have wanted to blog about it but was too busy, and now there's so much more to blog about! I'm going to back it up from here: 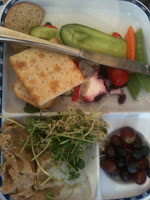 Congruent with my strategic approach to motivation I booked this weekend "off" to study for a course exam- I have been procrastinating. By blocking off the time I looked forward to having a "college girl" weekend of books rewarded with good food and beer. This is what I have been munching on today (I warn you this post will be food picture heavy, but you guys always ask me what I eat!). Last night we hit the Apple Factory in Brampton where the produce was not only A+ but also inexpensive. We bought these beautiful sprouts, cranberry goat cheese, blackberry syrup and so much more! The hummus is a homemade refried bean/chick pea dip with tahini, lemon and no garlic- I do like it plain. This was nutritious fuel for my studious brain. 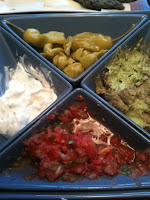 This was post race recovery week for me and I was back to business-as-usual with food. I admit I struggle replenishing post race quickly- it usually takes me a couple of days to get back on track. Honestly I think my body is just in shock for awhile. I had a friend for dinner this week and this is what we served: homemade salsa verde, guac, sourcream & some strange pickled hot pepper that I don't eat ;) We served it with chips and it was a delicious appetizer. For dinner Ben made scallops in vermouth with homemade pasta, asparagus, brussel sprouts & steamed greens with homemade dressing. 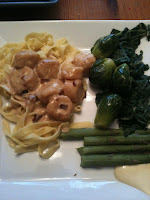 This was 2 full meals for me. I ate the 2nd one the following day and it was just as good! 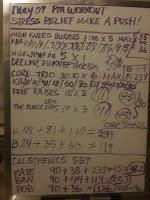 Mid week the guys and I busted out a pretty intense workout in the gym. We logged some reps and I was sore for several days. I had several clients on Monday after my race and have worked out every day since in some capacity. I am trying to make a push so I am rolling with it! 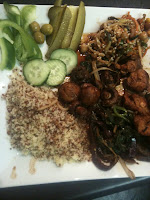 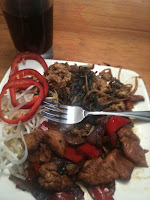 Post race I tried to get back to basics with a focus on replenishment and protein to build upon the exertion I just spent, which looked like this: couscous/quinoa, raw veggies, chicken, mushrooms, greens, bean salad, mmmmm. And also like this (a variation): chicken with pan fried veggies, egg-foo with greens, bean sprouts and red peppers with red wine! I definitely replenished in a healthy way. There might have been a (big) bag of potato chips in there somewhere too :) 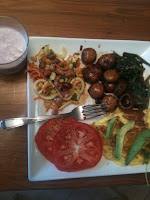 Coming off my carbo flush last week did take a full 2 days. This was my pre-race meal, as I'd planned: bean salad, mushrooms, greens, eggs, avocado, tomatoes, smoothie. It was perfect and I felt great nutritionally after my strategic week of food planning. It was my first attempt at carbo flush/load pre-race and I felt ready for race day. I had hydrated diligently for 2 days, which I felt offset the few beer I drank on Friday night :)

My clients scoff when I say that I lack discipline. I have what I like to call "big picture discipline", but sometimes in the moment I cave (like everyone else hehe). I drank beer Saturday night and stayed up too late. I woke up late at 6AM with a 7:30AM race. I was not motivated to eat oatmeal nor rush around to do it. I had a banana and coffee, 1 bite of a protein bar; I took a smoothie that I tossed out. Go figure. Pre-race nutrition plan blown in the blink of an eye. It was an intuitive morning and I just went with my gut.

I made it to the race by 7AM and the parking situation was different! The lot I typically use on race day was closed off and I had to circle around following cars to find another lot. I didn't find any of my runners in the agreed upon spot and was lined up to pee at 7:22. Kill me. By the time I found the start line they were singing the national anthem. At the risk of being rude I went forward, found a few of my runners, wished them well with hugs and continued to look for my running buddy Wayne amidst the thousands lined up. I squeezed towards the 1:45 pace bunny down the middle and I swear when I found Wayne and hugged him they began the 10-second countdown. That was a charmed start and I was so excited! We couldn't believe I found him and I admit I had started to panic a little :) 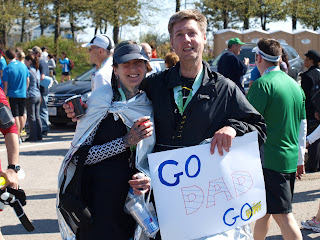 It was a typically fabulous race with warm perfect weather, clear sunny skies and a lot of really nice exchanges with runners along the route. The upshot is we ran a 1:55. I could have run faster but Wayne was doing SO well in his first ever half marathon that I could not leave him. We finished together in a very respectable time and had a great camaraderie that left me very uplifted. 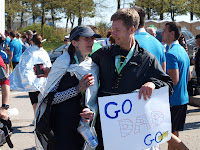 For me performance wise I feel the progress I have earned. My RPE on the run was about the same as my postpartum race in 2010- about a 14 (moderate). My time that year was 2:06 so I figure I shaved 10 minutes off the same effort. Last year I ran a 1:51 with an RPE of about 16. I figure with a ramped up RPE a 1:45 is very achievable. I am very happy with my race pics. I look relaxed and happy and my form is great. I consider it a PB, and that's not loser talk :)

I'll also say that there is no doubt in my mind that my pre-race week nutrition SAVED me when race morning got chaotic. Big picture discipline trumps momentary interruptions. Now there's a lesson in turtle training :)

February 02, 2018
I get asked this question all the time! Here is my answer: Research has shown that 100% of pregnant women will develop some degree of diastasis recti. A diastasis is a lateral separation in the abdominal wall between the recti or “six pack”, due to a stretching of the midline connective tissue or “linea alba”. Although some diastasis will heal postpartum, in many cases a separation will remain without restorative exercise. Distention from DR will present as a doming in the midline. Women who heal a diastasis spontaneously or through restorative exercise may still find that their abdomens are distended, particularly after a meal and/or at the end of the day. If there is no diastasis, why is this? This abdominal distention does not occur in the midline, but rather across the entire abdominal wall. This is due to a weakened hypotonic TVA- transverse abdominis muscle. The TVA is the deepest anterior abdominal muscle, wrapping around the midsection like a girdle, with a left an
5 comments
Read more

Kate's Guide to Getting the Correct Sports Bra!

December 27, 2010
I wear an unusual size and it took me years to unlock the secrets to bra fitting (and finding!) I suffered for years in improperly fitting bras, and during exercise I would wear 2 or 3 just to get the support I needed.  E very woman needs support while performing sports; not having proper support means that there is extra stress put on the back during various activities. Even low-impact exercise s done without the support of a sports bra can result in strain on the upper back and shoulders that can result in pain or worse- injuries that may develop over time. Sports bras affect a woman’s posture. Exercising without support can result in slouching to prevent painful bouncing which throws the back and hips out of alignment and impedes form, leading to potential injury. The most common mistakes are when women wear a bra that is too small in the cup and too loose around the body for example a 38e instead of a 36f. Note: When you go down a band size, go up a cup! Step 1: T
Post a Comment
Read more

March 01, 2018
I had an opportunity to try a food delivery service called Hello Fresh. A lot of people have been talking about it and it is becoming a popular option for people who are too busy to shop and plan for meals. It is a much cheaper and healthier option to eating out.  Most meals cost approx $12 per person and the portions are generous. I am always nervous about subscription services, and in order to redeem the coupon I was gifted I had to signup with payment information. I reviewed the cancellation policy which seemed very uncomplicated. Further to, I can skip weeks as I choose, pausing my subscription. It seemed fair. My resident kitchen helper Ben volunteered to blog about the meal preparation. Ben is a fantastic creative cook and hobby chef. As we have prepared more Hello Fresh meals he has “beefed up” the ingredients to make extra portions from the same recipe, as well as kid friendly (plainer) versions. Here is Ben’s review of our first Hello Fresh Meal, a Pork Schnitzel.
Post a Comment
Read more